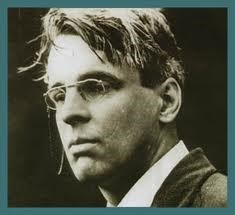 W.B. Yeats died in France on 28th January 1939, in the Hôtel Idéal Séjour in Menton. However he had frequently spoken about the subject of his death with his wife George (Georgina Hyde-Lees). She says his words on the subject were:
“If I die bury me up there and then in a year’s time when the newspapers have forgotten me, dig me up and plant me in Sligo.”
Up there is a reference to Roquebrune, where he did indeed have a discreet funeral and was quietly buried. His body wasn’t moved until September 1948 to Drumcliffe in Sligo, Ireland. The operation took place on the Lé Macha of the Irish Naval Service, funnily enough under the charge of Sean MacBride, for the Irish Government. Sean MacBride being the son of Maud Gonne MacBride, and the Minister of External Affairs at that time.
So now according to his wishes, W.B. Yeats is resting in the peaceful church yard of Drumcliffe, at the food of the Benbulben mountain. It is truly a stunning location, with a high cross which was constructed in the 11th century and a round tower’s remains. During the 11th century there was a Christian monastery there, which had been founded in 574 by Saint Columcille. 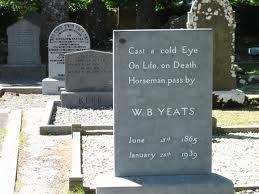 If you come on the Donegal to Sligo road, it is the round tower remains that you will notice firstly. It is said that the remains, which is basically a massive stump, will eventually collapse as soon as an intelligent man passes by. So far it is still standing, you never know, maybe you can be the intelligent man to make it collapse!!
The high cross can be seen set into the wall of the graveyard, and it has an unusual depiction of what appears to be a camel on the cross. This is the perfect point to drink in the marvellous views of the Benbulben mountain.
After your visit you can enjoy great paninis, home-made desserts and cakes at the Drumcliffe Tea House and Craft Shop. It has a nice relaxed atmosphere, some original quality crafts and a collection of Irish interest and Yeats books.

“Under bare Ben Bulben’s head
In Drumcliff churchyard Yeats is laid.
An ancestor was rector there
Long years ago, a church stands near,
By the road an ancient cross.
No marble, no conventional phrase;
On limestone quarried near the spot
By his command these words are cut:
Cast a cold eye
On life, on death.
Horseman, pass by!”